A festival keynote, music, study, and a bonfire at dusk. 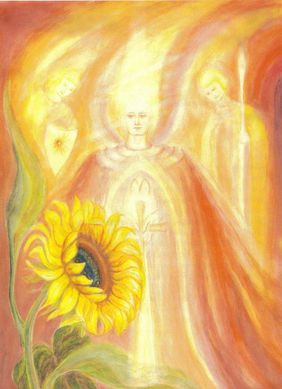 The Sweetest Michaelites on Earth--Corps de Michael--are pleased to announce the timely theme for our Michaelmas Festival 2019, "Artificial vs. Michaelic Intelligence".  Please see attached pdf for reflections and seminal thoughts on the festival theme.  We are looking forward to your input during the open conversation following a festival keynote address by David Lenker.  If you can not open the pdf, please reply for an inline version of the festival theme.  Additional festivities to include: music and a possible group study of Chapter One, The Philosophy of Freedom.  A Michaelmas Bonfire-on-the-Meadow will conclude festivities at dusk.

The Bonfire-on-the-Meadow will celebrate the 60th Anniversary of the first organic harvest following the 9th September 1958 inauguration of Stonehaven's far-sighted organic mission.  In 1737, founder Thomas Logan acquired Stonehaven Farm as a direct grant from William Penn's Holy Experiment.  Thomas Logan is interred at the historic Derry Church Cemetery in Hershey.  A plaque on the cemetery gate names Logan an "Ensign, Patriot, and Hero" for his service in the American Revolution.  His heirs erected our festival venue, the Widow Logan House in 1824 with two meeting rooms subsequently lazured by Corps de Michael members and friends in time for Corps de Michael founding celebrations on Whitsunday 2000.

Drawing from past deeds, the Michaelmas Festival will touch on the mission of Corps de Michael to foster new forms of thinking today and in the future.

The Age of Michael has dawned.  Hearts are beginning to have thoughts; spirituality is now proceeding not merely from mystical obscurity, but from souls clarified by thought.  To understand this is to receive Michael into the heart. — Rudolf Steiner, Anthroposophical Leading Thoughts