Philip and Pam Boulding have toured worldwide for over 40 years and recorded 22 albums, performing on their own hand-crafted Celtic harps and hammered dulcimers along with whistles, button accordion, concertina and more. Their tour extends from Maine to Virginia. 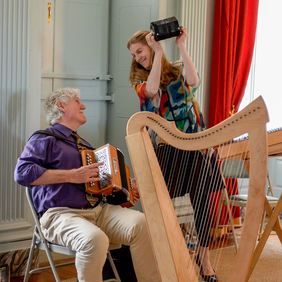 Since 1978 Philip and Pam Boulding have drawn a loyal following worldwide, captivated by their energetic arrangements of Celtic music and their own engaging compositions, intertwining Celtic roots with classical and world music influences. They have performed throughout the United States, Canada, Ireland and Japan, toured and recorded with Dan Fogelberg, appeared on Garrison Keillor’s “A Prairie Home Companion,” and recorded 22 albums on four labels. They have been touring for 40 years, including their tradition of Celtic Yuletide Concerts with their five children and grandchildren who perform with them on violin and ‘cello, Irish step dancing and more.

Philip and Pam also design and build Celtic harps for an international clientele, run the School of Magical Strings and host the Magic Hill Summer Harp Camp at their beautiful 5-acre home in the Pacific Northwest overlooking the Puget Sound. Their newest CDs Fairy Wind and Lullaby for a Soul’s Journey will be available at all of their shows.  Fairy Wind is also available for download at http://cdbaby.com/cd/magicalstrings  where you can listen to sound clips of every track.

Some of the harps on which Philip performs may be available for sale to an interested member of the audience.