The search for spiritual identity in the 21st century. 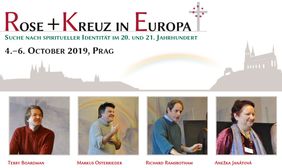 Rudolf Steiner knew that the Consciousness Soul can fully awaken only via the encounter with evil. Our greatest task is, as the Gospel says, to learn to distinguish the workings of various spirits. We should learn to tell what forces are at work in humanity and what means they use. Our task is to distinguish truth from disinformation, to see through what the media pour upon us, and above all to strengthen our soul with true images, so that it can become conscious.

“Anxiety has long been with us in the modern world, at least as long as European urbanisation following the Industrial Revolution, but what is peculiar about the anxieties felt today? It is that we are living in a time of great spiritual attack upon humanity owing to the special nature of this era – the 21st century since the Incarnation and Resurrection of Christ. The concrete spiritual nature of these attacks needs to be identified for us to be able to face them. They are threefold and can be characterised as the Red, the Blue and the Green: the threat of war and conflict, including economic conflict; the technological threat of AI and Transhumanism, which is heading in the East towards total social control and in the West towards pan-human genocide, and the actual ecological threat to the earth as well as the accompanying Green hysteria and 'Pied Piper panics' engendered by movements such as Extinction Rebellion. This two-part talk will identify the three threats that underlie modern anxieties, the spiritual forces behind those threats, and three qualities we need to face them: courage, open-minded insight (not least into ourselves) and the will to act appropriately.“

In his two contributions, Markus would like to address the question whether in today’s world, the human being is not only challenged by the sheer acceleration of technological innovation, but also has to realize that technological devices find a strong resonance within his/her own inner being. This resonance stems from a largely unconscious part of human physiology, the instinctive life as far as it is impelled by hormonal and neuronal functions. To what extent are we tending more than ever before to become robotic beings in body and soul ourselves? And how is this robotic being in us stimulated by devices and manipulated by other powers, to the point that we are in danger of losing free will and the possibility of decision-making? What has this to do with what Rudolf Steiner called in 1917 “the fall of the spirits of darkness”, as the direct counter-event to the arrival of the Michaelic Age? And how can we find a way of mastering these challenges in which we have to meet not only the devices of the outer world, but especially our inner demons as well?

On Ascension Day, 30 May 2019, 5G was introduced for the first time in each of the four capital cities of the UK. (London, Edinburgh, Belfast and Cardiff.) The choice to do this on Ascension Day may itself serve as a strong awakening call. The day was also the death-day of Daniel Dunlop, a friend and pupil of Rudolf Steiner, who was connected not only with questions related to the ‘Mysteries of the West’, for example those connected with the name of King Arthur, but also with questions related to electricity and technology, creating the World Power Conference, which he discussed with Rudolf Steiner, as a means of exploring and ensuring responsible ways of working with energy and technology. With the introduction of 5G at the same time as the huge upsurge of support for ‘green technologies’ and for action against climate change, which are now swiftly becoming public policy, Richard’s two lectures will explore 1) the Arthurian Mysteries and the quest for a true relationship to ecology, technology and new social forms 2) Outer opposition and inner illusions upon the way - and 3) Possible ways forward.

I am a freelance lecturer, author and translator (from German and Japanese), my wife is Japanese and we have a 30 year-old son who lives in Australia, with his wife and two daughters.

Freelance international historian, lecturer and teacher – from Norway to Iran and from Ireland to Russia. His particular interest is in the spiritual, cultural and geopolitical relationships between America, Europe, the East and Eurasia. He is currently working on the historical origins of the Grail epic in the cultures of western and eastern Christianity as well as in (esoteric) Islam and Judaism.

A writer and theatre practitioner living in the UK. He is currently directing Rudolf Steiner's 4th Mystery Drama. Both in his writing and his performance pieces (e.g. Who Wrote Bacon? and I am Andrej Belyj) he has been exploring for many years “true and false paths” in Western, Eastern and Central European culture.

She worked as a psychologist and later, as a director at the  Jedlicka´s Home for people with learning difficulties and physical handicaps. She founded The Tabor Academy of Social Arts. She has also established the Tabor Foundation and The Association for Social Therapy and Curative Education in the Czech Republic. Since 2008, she has been the General Secretary of the Anthroposophical Society in the Czech Republic.

Full details and registration at the link below: